What’s been clear: The city of Albany has a lot of vacant buildings.

What’s not been clear: Exactly which buildings are vacant, and what’s the actual total number of them.

But the city now has a new vacant building list, and it’s probably the best, most accurate estimate in years.

It’s part of a larger process to more proactively take on issues such as vacant buildings, code enforcement, and neighborhood development.

OK, so how many vacant buildings? 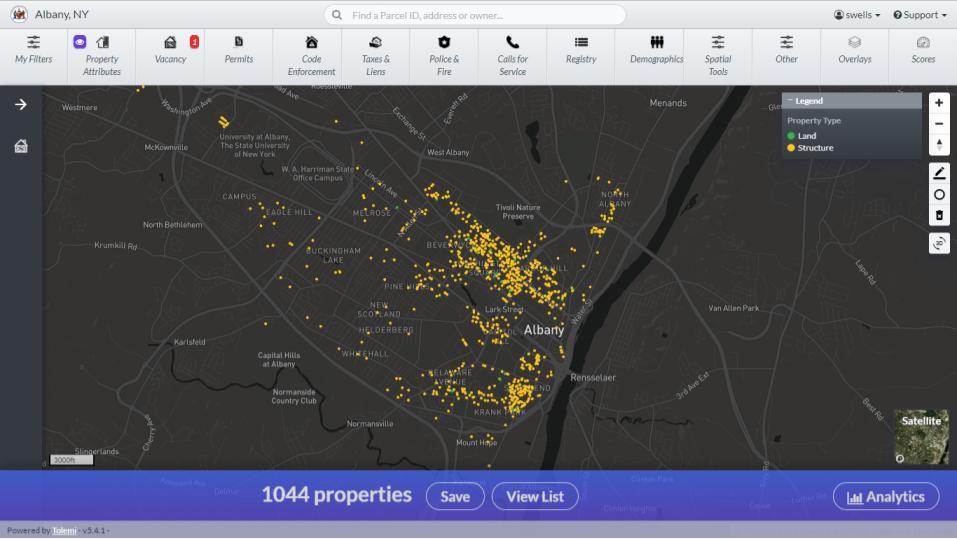 The current best estimate is that there are 1,044 vacant buildings in Albany, according to Sam Wells, the neighborhood stabilization coordinator for the city of Albany. That’s out of roughly 30,000 properties in the city.

(A 2012 effort by the Jennings administration pegged the number of vacant buildings at roughly 800.)

This new estimate is the product of an effort headed up by Wells, who started his job with the city last year, to gather up all sorts data about properties around the city for a new system that, for the first time, combines all those bits of info in one place. The hope is it will help city goverment have a better sense of what’s going on and allow it to better strategize about ways to move forward. (More on that in a second.)

Wells presented the new vacant building inventory and data system to the city’s Vacant Building Task Force on Wednesday. A few other takeaways from his presentation:

+ Of those 1,044 vacant structures, 639 were cited during the past two years. And a little more than two thirds of those cited properties were among the buildings judged to be in the worst shape.

+ 402 of the buildings were the source of at least one police call in the last two years.

+ And, in what’s maybe a glimmer of hope, some sort of permit was issued for 219 of the buildings in the last two years.

Wells told the task force that the majority of buildings on the new list are assessed at a value less than $50k. And that highlights one of the major sticking points in getting these buildings back into use: many of them require work that would cost more than their market value when finished. The city currently has $1 million in funding to distribute as grants to help cover this gap for vacant building projects. 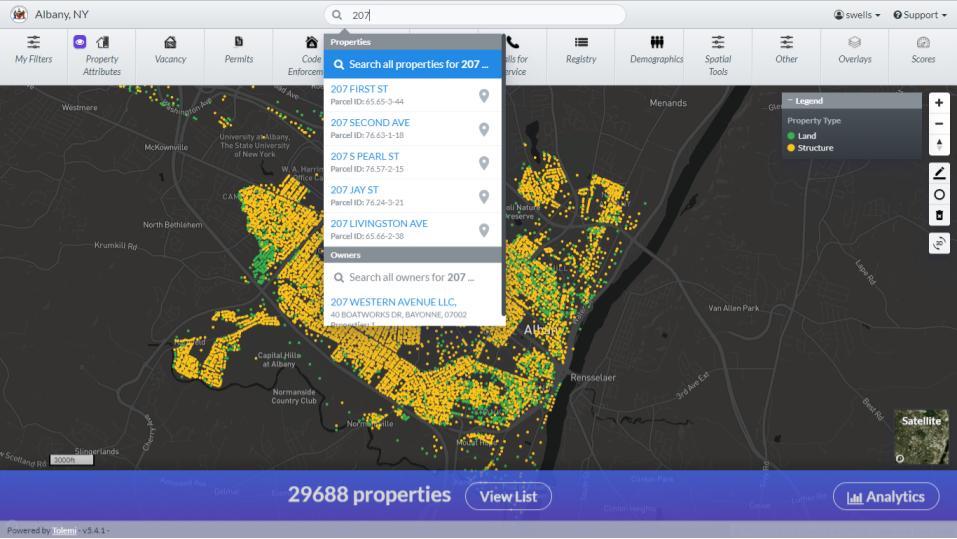 As mentioned above, the city created this new vacant building list as part of a larger project to pull together all sorts of data on properties — bits like code enforcement actions, snow shoveling violations, police calls, tax status. And Wells has been pouring that data into a system called Building Blocks, a cloud-based service the city is paying for via a grant from the state Attorney General’s office (here’s a demo video).

The system can do a bunch of things with all this property data, but first and foremost it provides one location for the information that’s easily accessible to various city departments.

“It’s huge for the city,” Wells said Wednesday during a meeting break. “It gives us a big advantage that wasn’t there before. So before when you wanted to see how each department interacted with a property, you had to call or send over e-mails and it took time and effort and energy. And now it’s there, available at a few clicks of a button. It’s a speed and efficiency we haven’t had before.”

This ease of access opens the way for different parts of the city to work together more smoothly. For example: Wells said one of his next tasks is to meet up with the police department’s Neighborhood Engagement Unit and get the officers there working with system, accessing information about problem properties, and adding info back into the system based on what they see.

Building on that info 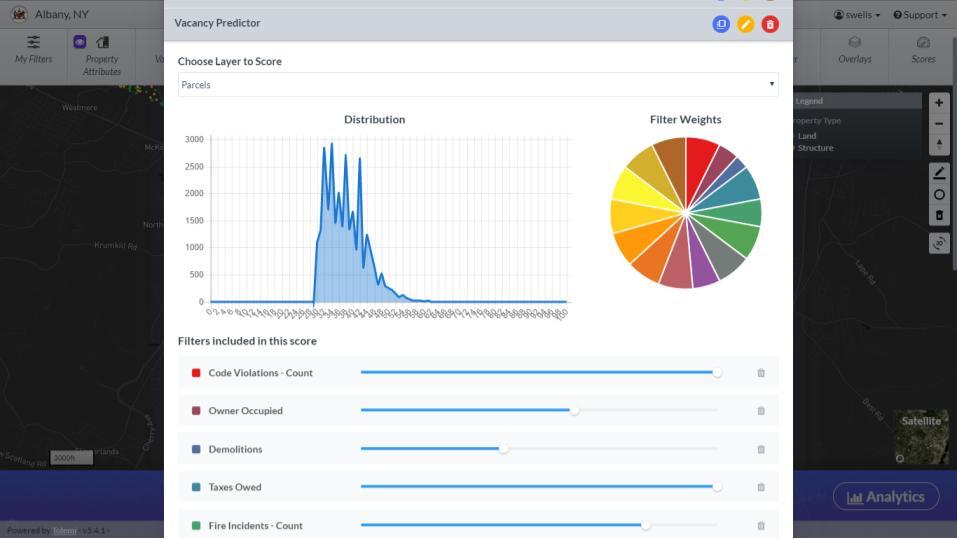 The most interesting potential uses of this new data system are ones in which the city might pull together a handful of threads and use the resulting patterns to be proactive.

Another example: The Building Blocks system has info about occupied properties, too. And Wells said he’s hoping to work with Rob Magee, director the city’s buildings and regulatory compliance department, to look for what he called blind spots in code enforcement.

“So we can look at properties that have seen multiple police cases, multiple complaints to DGS, also owe taxes — but haven’t had any code violations,” he said. “And then go in and say, you know, these are properties that need code enforcement attention, but haven’t received it in the past.”

And a step beyond that: The system allows the city to analyze and score properties based on their various characteristics and highlight properties that are endanger of becoming vacant. The city could then potentially take action in an attempt to head off a problem.*

“So we can look at properties that have seen multiple police cases, multiple complaints to DGS, also owe taxes — but haven’t had any code violations. And then go in and say, you know, these are properties that need code enforcement attention, but haven’t received it in the past.”

There might also be potential for the city to work with partners beyond city government. Adam Zaranko — the executive director of the Albany County Land Bank (an independent org that works get foreclosed properties back into use) and a member of the task force — pointed to an example in the South End where the land bank has been involved in multiple properties.

“Now what we can do is maybe target a block or two and just comprehensively address different layers,” Zaranko said. “Why not now, with this data, understand which properties to target on the city’s side of the ledger so they don’t fall into foreclosure and intercept them before they get in the pipeline and take that many year journey to the land bank.”

Public data — but not necessarily available to the public

The data the city’s gathering for this new information system is mostly public. Much of it is the sort of thing for which a member of the public could theoretically file a FOIL request. But for the moment the city is not planning to make the system that pulls it all together available to the public.

Mayor Kathy Sheehan said during Wednesday’s meeting that officials are concerned that making all of this information about buildings easily accessible to anyone could also open the way for people to use it in nefarious ways. She pointed to the possibility of, say, people scouting the list of vacant buildings in the lowest level category — buildings that, from the outside, don’t appear vacant — and targeting them for something like pipe theft.

And Sam Wells mentioned another issue with opening the system to the public: it’s complicated to use.

“It’s a heavy analytics tool,” he said, talking about how it’s sometimes hard to know what exactly you’re looking at and what it means. “The last thing we want to do is mislead the public.”

Full article on All Over Albany

Powered by Convert Plus